The Australian Government is currently implementing a mandatory news media bargaining code. This will fundamentally change the commercial relationships between digital platforms and certain news organisations. It will require that digital platforms – initially Google and Facebook – bargain with news media over remuneration for news content on Google and Facebook’s services. In this bulletin, we consider some of the complexities of the code, and the challenges in finding the kind of bargains the Government is hunting for.

The mandatory code follows from a lengthy, detailed ACCC Digital Platforms Inquiry and from the follow-on consultation processes by Government (Figure 1). The code’s bargaining framework is on track to become operational in March 2021.

See further details on the progress of the Government’s Bill (Code).

The code is built around bargaining and compulsory arbitration provisions, but also provides for contracting “around” the code through individual negotiations and standard agreements.

Intervention is based on differences in bargaining power

The ACCC in its Inquiry recommended a code (initially voluntary) to address bargaining power imbalances between major digital platforms and media businesses. The imbalance is said to stem from these platforms being “unavoidable trading partners” for news publishers.

Figure 1: Progress of reforms on news media and digital platforms

Digital platforms use news content by linking (or allowing links) to news items on their services, including previews or snippets. This allows digital platforms to maintain the attention of their users, and so increases their ability to sell “eyeballs” to advertisers. Historically, the digital platforms had not paid the content generators in Australia (i.e. the Australian news media) for the use of these links.

The ACCC’s interpretation was that news media lacked the bargaining power to seek payment. The lack of power comes from the different consequences from news media withholding supply of news. Withholding hurts both parties, because it makes the digital platforms less useful and reduces click-throughs to news media sites. However, the argument is that withholding makes individual news media entities relatively worse off than the larger digital platforms because those platforms have a wide variety of sources for news links.

The argument then goes that this inability to seek payment has reduced news media’s ability to fund the production of news. The Government has supported the ACCC’s position – and identified it as a particular problem – because news has special public interest characteristics in a democracy.

The responsible Minister will designate digital platforms and services to which the mandatory code applies. The stated intention is to designate Google’s search services and Facebook’s news feed service. Apple, through its News platform, is the next most obvious candidate.

The designation provisions have two main points of interest.

The first point of interest is that there is only one criterion against which platforms are to be assessed. This is whether the Minister considers there to be a significant bargaining power imbalance between Australian news businesses and the digital platform.

Because the bargaining code imposes compulsory participation for platforms, the bargaining code is quite different from the hotly-contested Part IIIA access regime process for the declaration of nationally-significant infrastructure services. The criteria in the Part IIA access regime (Figure 2) are challenging to satisfy, facilitating compulsory access only where declared services use a natural monopoly facility and access would promote competition in a dependent market.

The second point of interest is that there are no substantive rights of appeal on application of the provisions. Again, this is at odds with other forms of economic regulation such as Part IIIA. However, this lack of rights to appeal  is – unfortunately – becoming an all too common feature of economic regulation in Australia.

Figure 2: Comparison of criteria for mandatory bargaining and mandatory access to services under Part IIIA 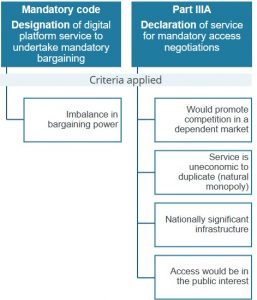 The designation provisions also take a different approach to that which is to be applied in regulation of digital platforms in Europe and the United Kingdom. These proposals – which are not directed at bargaining with the news media specifically – focus on designating platforms through either quantitative criteria relating to business size (EC) and/or the presence of entrenched market power (UK).

The proposed bargaining code requires bargaining over the supply of news content to a digital platform. The code does not require any particular payment, but provides a framework for negotiation for payments.

The economic issue of suitable compensation is a particularly thorny one.

Economics tells us that voluntary exchanges create value to the buyer and seller. How the value is divided between the parties that create it is a function of their bargaining power. The price that is agreed determines how this division of value occurs.

The current system effectively has a zero price – that is, the platforms use links to news content at no charge. That sounds like the digital platforms have all the bargaining power.

However, there is no fundamental rule that the price agreed in the absence of bargaining power would always be positive. That is, a publisher might pay a platform to host a link if the platform is highly valued – publishers pay so that consumers can click through the link to the publisher’s website which is then monetised via advertising, subscription or other commercial purposes.[i] It is also conceivable that platforms and news both create value for each other (Figure 3) – which leaves an arbitral panel to determine the “net” flow of value between the parties.

Figure 3: Who pays whom?

The code guides the arbitral panel “to consider the outcome of a hypothetical scenario where commercial negotiations take place in the absence of the bargaining power imbalance.” Modelling hypothetical scenarios is very complex, and in similar circumstances, price-setters typically look for benchmarks for prices.[ii] But are there any benchmarks where prices have been agreed without (a strong degree of) bargaining power?

Google and Facebook’s arguments against the code vary. Google has stated that it supports the principle of a code and has deployed its own news contribution model outside of the code which has signed up publishers in Australia and overseas[iii], but has three key issues with the current proposals:

Facebook has stated that the code compels it to pay for news content in a way that is not connected to commercial reality, including encouraging ambit claims. Facebook suggests it is effectively compelled to acquire all news content at whatever price is determined.

It is difficult to predict how the bargaining code is likely to perform in practice, and, in particular, how well it will achieve its main goal of encouraging commercial negotiations to increase the flow of funds to Australian news media.

There are certainly significant penalties for not bargaining in good faith – as much as 10% of annual turnover. However, as with any new law of this kind, significant uncertainties remain. For example, it appears that the code allows for compulsory price determination without actually requiring digital platforms to provide access to their platforms at all.  This has raised the spectre of Google removing search functions and Facebook removing news links posted on its platforms.

The Government has remained unmoved by such possibilities, maintaining faith that bargains will be struck, and has made significant provision for those bargains to occur outside of the code itself.

In our experience, firms do not like the risks associated with (highly) uncertain arbitration outcomes. This would favour settling. On the other hand, the uncertainty in the law may favour one side thinking it can get a bargain in arbitration.

At the time of publication, the situation is by no means settled. The forthcoming weeks and months will be closely watched by digital platforms, news media and policy makers alike.

Google’s and Facebook’s activities in the last few days have revealed very different approaches to the forthcoming parliamentary assent of the mandatory news code.

Google has settled payments with most of the larger Australian news media organisations, including a global deal with News Corporation. These deals are not subject to the mandatory code, but have been struck with knowledge of the major provisions as drafted.

Facebook has elected to prevent users including news media from sharing local and international news content on its website. Facebook has again reiterated its key concerns with the code, and identified the difference between itself and Google: that Google Search is inextricably intertwined with news and publishers do not voluntarily provide their content. Facebook suggests that publishers willingly choose to post news on Facebook, as it allows them to sell more subscriptions, grow their audiences and increase advertising revenue.

In terms of Figure 3, Google appears to be accepting that it is closer to the left end– that content keeps the user on Google’s services and helps it sell advertising (platform pays publisher). Facebook sees itself as more to the right, in that it helps publishers at least as much as Facebook benefits (meaning no payment, or publisher pays platform).

The early signs are that the code has delivered on its promise of a significant shake up in the funding of news in Australia – but not necessarily delivered all of the bargains the Government was hunting.

The Government has now moved amendments that address some of Facebook’s concerns with the code. This includes that the Minister’s designation decision should take account of whether the platform has made a significant contribution to the sustainability of the Australian news industry; that there be a compulsory mediation process prior to arbitration; and that more notice be given of a platform designation.

In exchange for the changes to the code, Facebook will restore links to Australian news content. Facebook has committed to entering into good faith negotiations with Australian news media businesses and seeking to reach agreements to pay for content. Seven West Media became the first Australian media group to agree to a commercial arrangement with Facebook.

The effect of the changes to designation makes it more difficult for the Minister to designate a platform service. Potentially, a platform could use the existence of a number of agreements with news businesses to argue against designation where a platform is in dispute with a single news business. However, the additional designation criterion offers little in the form of a clear or quantitative threshold.

[i] For example, ad-based content recommendation platforms Taboola and Outbrain work in this fashion.

[ii] At least in concept, similar issues of value have arisen in disputes around copyright and in retransmission of free-to-air broadcasting signals that benefit both television networks and pay TV providers. In Australia, the Australian Copyright Tribunal has made a number of determinations on the equitable remuneration that pay TV supplier Foxtel should pay to free-to-air networks for retransmission of broadcasts.  The Tribunal adopts the hypothetical bargain approach but this has not led to simple or agreed methods of price determination. See Audio-Visual Copyright Society Limited v Foxtel Management Pty Limited [2012] ACopyT 1.