A fundamental objective of economic regulation is to ensure a regulated firm has a reasonable opportunity to recover its efficiently-incurred costs. Without this opportunity, such a firm will no longer undertake necessary investments to deliver services to its customers. The Australian Competition and Consumer Commission’s (ACCC) recent draft decision on how State Water’s volume risk should be managed departs from standard regulatory practice. If confirmed in its final decision, it would set a precedent for other regulated businesses with volume risk, such as electricity and gas networks, telecommunications and urban water. The key departure is the ACCC’s decision that State Water’s cost recovery be managed using a ‘Loss Capitalisation Model’. This means State Water’s financial viability will become dependent not on its efficient operation and appropriate pricing, but on future rainfall levels over which it has no control.

For the first time in its history the ACCC has been tasked with directly regulating the prices of an Australian water business – the New South Wales (NSW) bulk water infrastructure operator State Water (previously regulated by the NSW Independent Pricing and Regulatory Tribunal). State Water owns and operates a network of storage and delivery assets used to supply water to irrigators and other customers throughout NSW.

A key issue in the price review was how to best manage volume-related risks. Volume risk is critical in bulk water infrastructure because the costs are largely fixed, while the volume of water delivered can vary widely. This variability simply reflects the variable inflows from rainfall – which in turn will affect the amount of water allocated to water users under their entitlements and delivered to them via the supply network. This means that if volumes delivered are higher than expected when prices are first set because it rains more than expected in the catchment area, revenues can be far higher than required to cover efficient costs Conversely, if volumes delivered are lower due to it being drier than expected, revenues can be insufficient for the business to function effectively. And the more prices are based on a variable component, the more pronounced the effect of such variations in volumes on revenues.

The standard regulatory response to the problem of volume volatility is to:

Following these principles, State Water proposed to deal with volume-related risk by progressively shifting towards a pricing structure with a higher reliance on fixed charges and less reliance on volumetric charges. However, the ACCC’s draft decision rejected State Water’s proposal to migrate to a more cost-reflective tariff structure, and compounded this by preventing State Water managing the volume volatility by using a revenue cap. We examine the possible consequences of its decision, particularly the adoption of an LCM to manage volume risk, below.

Rather than take the conventional regulatory route of approving cost reflective prices and a revenue cap the ACCC decided to retain the current pricing structure (based on a 40:60 fixed: variable price structure) accompanied by a Loss Capitalisation Model (LCM, termed an ‘unders and overs’ mechanism) to manage the revenue volatility for State Water and the price impacts for its customers.

We are aware of two other instances where the ACCC has approved an LCM. These were for the Australian Rail Track Corporation’s Hunter Valley Rail Network Undertaking and for NBN Co’s national broadband network access undertaking.

In both instances the Loss Capitalisation Model was adopted as a mechanism to facilitate investment in a growing network. The LCM was seen as providing the businesses with the ability to incur ‘losses’ – that is where the businesses cannot recover the annual revenue requirement – during the initial period of network expansion, when investment is highest and there is substantial excess capacity. These shortfalls would then be recovered from future customers once the infrastructure was in place and demand growth produced the necessary revenues to recover the initial losses.

However, in the case of State Water, the LCM is being applied to an entire, mature network. The under- and over-recoveries are not associated with growth related expenditure but, rather, with ‘business as usual’ expenditure. This is at odds with the usual use of an LCM to manage revenue shortfalls during the growth phase of a regulated business.

Impacts Of The ACCC’s LCM Model On Financial Sustainability

The obvious consequence of the ACCC’s draft decision is that State Water must continue to operate under a highly volatile revenue stream, as revenues will vary with volumes, and volumes increase or decrease with rainfall levels. This imposes risks on State Water that will be difficult to manage:

A fundamental objective of economic regulation is to ensure a regulated business has a reasonable opportunity to recover its efficient costs and to remain financially sustainable. Reflecting this, most regulatory frameworks allow businesses to earn both a return on and a return of (regulatory depreciation) capitalised expenditure. This approach allows investors to earn a return on the funds they have invested in the business, as well as to recoup the original principal amount invested.

A critical element of the ACCC’s proposed LCM mechanism is that State Water would only be allowed to earn a return on (not of) capitalised losses. The implication is that if State Water were to fund any revenue shortfalls through additional borrowing (as the ACCC recognises it must), the LCM would only allow it to service the debt (i.e. make interest payments) through an allowed return on the balance in the ‘unders and overs’ account.

The LCM makes no provision for the recovery of the actual losses capitalised, even though those losses represent the under-recovery of revenues previously approved by the ACCC as efficient. This effectively means that State Water would have no foreseeable capacity to pay back any principal amount borrowed to fund revenue shortfalls unless it has above-average sales in the future. The only way in which State Water could retire the debt is through rainfall exceeding the originally anticipated long-term average for as long and by as much as it has undershot that average. This in itself is likely to create concerns in the minds of financiers and credit rating agencies.

Unfortunately the ACCC appears to have ignored the fact that, in Australia, there can be extended periods of very dry conditions with very low inflows. Conversely, there can be extended periods of above-average rainfall. The ACCC’s LCM approach has no regard for prolonged periods of over-recovery or under-recovery and the potential to accumulate very large balances in the LCM account. In fact, the uncertainty associated with the potential impact of climate change on future inflows means that under the ACCC’s LCM, recovery of State Water’s efficient costs could be deferred indefinitely or indeed never recovered if average rainfall levels decline over time. A further consequence of this approach is that rather than simply ‘smoothing prices’, costs could be shifted across generations of water users in an arbitrary manner.

The inherent problems with the ACCC’s use of a LCM to address volume-related risk (rather than allowing more cost-reflective tariffs or the use of a revenue cap) are starkly highlighted by reference to actual events. Based on data relating to water extractions over the last seven years where rainfall has mostly been well below average, had the LCM been in place, State Water would have accrued a balance in excess of $100 million of under-recovery (see Figure 1). 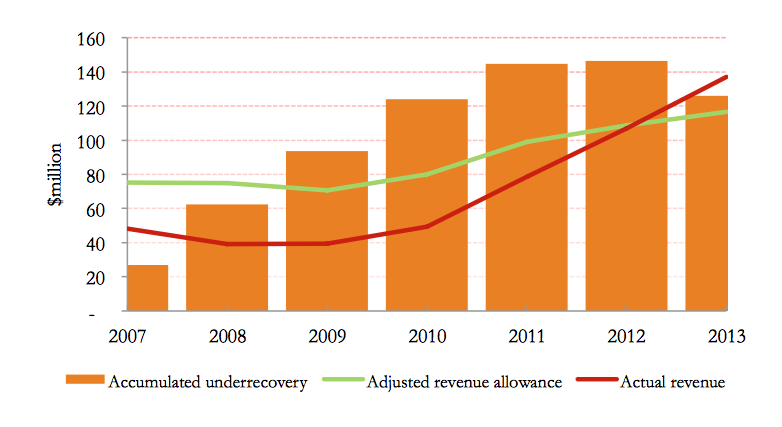 Notes: The graph is based on a stylised model developed by the ACCC for its Draft Decision. Frontier has input actual data for revenue requirement, forecast water extractions and actual water extractions for the period 2007 to 2013. Frontier made no adjustment to the underlying functionality of the model. Frontier also used the ACCC’s draft WACC of 7.44%. The adjusted revenue allowance shows the original revenue requirement based on State Water’s costs plus the additional requirement associated with the return on the LCM balance.

By eschewing the standard regulatory response to dealing with volume risk of adopting a cost-reflective tariff structure together with a revenue cap, the ACCC has engineered a set of regulatory arrangements that has the potential to severely undermine the financial sustainability of one of the largest water utilities in Australia.

By advocating the LCM, previously only applied to growth assets, the ACCC has engineered a theoretical construct which ignores the realities of the sector and sound regulatory practice, and which may result in a regime that is neither financially nor politically sustainable. This sets a precedent that should be of major concern to any regulated business where volume-related risk is a key issue.