Thinking outside the box: calculating damages

Explicit agreements among competitors that fix prices are illegal – and for good reason. If the collusion is successful, prices will be higher and output lower. But cartels are not always very successful. How can the effects be determined and the detriments measured? Frontier Economics has advised both plaintiffs and defendants in several recent cases in Australia where significant damages from cartel activities were sought or paid. This bulletin examines two major cases, looking at the challenges in modelling the effects of the cartels.

Australian competition law is enforced by the Australian Competition and Consumer Commission (ACCC) and the Federal Courts. The Courts have the authority to impose pecuniary penalties on cartel members when a cartel is discovered. Two of the highest fines in Australia for cases of this sort were in relation to vitamins – totalling A$26 million – and cardboard boxes – A$36 million.[1] In addition, the customers who were charged the inflated prices can form a class action and sue the cartel members for the damages suffered. On 10 March 2011, a class action led by Jarra Creek Central Packing Shed, which originally sought more than A$1 billion in damages from cardboard box manufacturers, was settled out of court.  The Federal Court hearing outlined a settlement sum of A$95 million plus all costs. This is the largest payout for victims of a price-fixing cartel in Australia.

Evidence that a cartel existed provides sufficient grounds for prosecuting firms. However, for damages claims, evidence that the cartel was successful is imperative.

While we often assume that collusion is in a firm’s interest, cartels are often unsuccessful because there are powerful incentives for individual firms to cheat on the cartel. If the cheating firm can steal business by charging a little less than the agreed collusive price, it may well sell many more units with close to the monopoly profit margin on each unit.

So what determines a cartel’s success? There are many potential factors. Some relate to the ability of firms to monitor each others’ conduct, which is required to ensure agreements are being adhered to. Others change the balance of incentives to defect from or commit to the cartel. Some particularly important factors are highlighted in Figure 1. Rarely will they all be present at once. 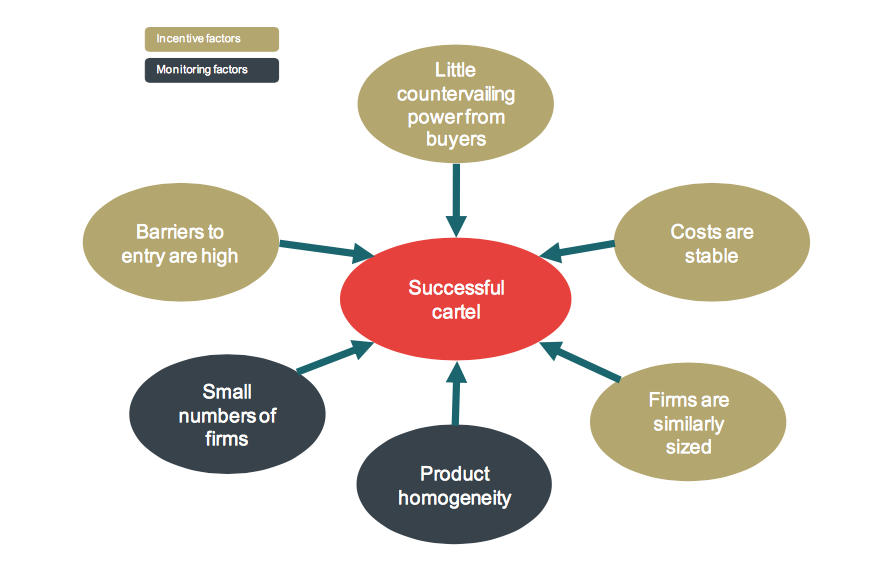 This list of factors only gives a broad feel for likely cartel success in any one case. Ultimately, for damages claims, each case requires a careful analysis of the available data – making the estimation of damages caused by a collusion an empirical matter. Generalisations, whether from theory or from other empirical research, are of little help.

At this point the role of quantitative economic analysis becomes critical. Different techniques can be applied and models developed to estimate the effects of a cartel, and to quantify the size of any damages. Generally, the first step is to estimate what price would have prevailed in the absence of the cartel arrangements, known as the “but-for” price. This may be done in different ways, reflecting market characteristics and data availability. However, the vagaries of the real world make this task complex.

In the cartel cases mentioned, what were some of the challenges Frontier faced in estimating “but for” prices?

Meeting the challenges that arose in estimating damages required the sound application of economic principles as well as the use of a variety of data analysis and modelling techniques. In addition, since the analysis was subject to challenge by the other side’s experts, it was vital for us to have a thorough understanding of any potential pitfalls in applying the various techniques.

Litigation is always complex, and a cartel damages class action case is no exception. For such cases, the success of the collusion in raising prices must be proved because cartels are not always successful. Therefore, the critical issue in settling damages cases is reaching an agreement on what prices would have prevailed absent the collusive arrangements.

The textbook scenario of a perfectly competitive industry becoming a monopoly under a cartel would give us simple answers about the effects of a cartel that all would agree on. Unfortunately, these textbook scenarios are as common as Harry Truman’s one-handed economist! Thankfully, there are tools and techniques that enable us to deal with the vagaries of the actual context in which the cartel operated and to develop realistic estimations of its effects.