Costs of excluding Huawei from 5G networks in Australia

In August 2018, the Australian Government determined that Huawei would not be allowed to participate in procurements to supply 5G network equipment to Australia’s mobile network operators.

Prior to this decision, Frontier Economics was engaged by Huawei to consider the economic impact of excluding Huawei from these procurements.

We found that the cost to industry and consumers of reduced competition from excluding Huawei will be high. We estimate that the exclusion of Huawei will increase the cost of 5G radio access network (RAN) deployment in Australia by up to (AUD) $2.1 billion, which will be recovered from consumers through higher retail prices. Further, for networks already using Huawei for 3G and 4G equipment, additional switching costs could add several billion dollars and materially delay 5G deployments.

Competition between Australia’s mobile network operators has produced a vibrant and dynamic market for mobile services. Prices for mobile phone services have fallen by an average of 4.2 per cent annually since 1997–98, while Australia ranks in the top 5 in the OECD for mobile penetration. The exceptional outcomes for Australian mobile users have been underpinned by competition between global equipment vendors to supply network equipment – through the various generations of mobile services.

While competition in the global market for supplying radio access network (RAN) equipment is intense, the market is highly concentrated, comprising three large equipment makers (Huawei, Nokia and Ericsson), and a smaller competitive fringe. This is because the scale of R&D spending required to continually improve performance is very large – globally, Huawei spent almost USD$12 billion on R&D in 2016/17 (substantially more than both Nokia, approximately USD$5.6 billion, and Ericsson, approximately USD$3.8 billion (USD).

Excluding Huawei – or other vendors – from the supply chain would create very material risks of uncompetitive procurements for Australian networks. The concentrated market means there are few alternative vendors with the necessary expertise and scale to provide 5G network equipment. This reduction in competition would substantially increase network procurement costs and retail prices, to the disadvantage of Australian consumers.

There would also be other costs from excluding Huawei. This includes the loss of its particular quality attributes, and additional switching costs for mobile networks that have to change vendors where Huawei has been a key supplier. The detriments are summarised in the figure below. 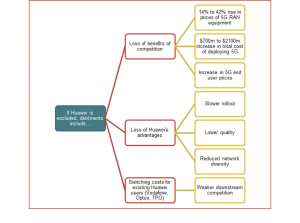