In an earlier bulletin, Uber Regulated? we examined the case for regulating so-called “sharing economy” services, like Uber and Airbnb. In this companion piece, we discuss why it is important to understand the economic value likely to be created by these services. Gains to the community from regulatory reform largely hinge on new services filling gaps in existing services, and creating new sources of demand, rather than substituting for existing services. These gains should be the focus of government attention when thinking about to whether to regulate to ‘level the playing field’.

Governments face a dilemma about whether and how to regulate new services that use digital technology to disrupt existing service provision models. By lowering costs to consumers and sellers and crafting new mechanisms to promote trust, these services are unlocking value in existing infrastructure. This provides new consumption opportunities to people who would otherwise not consume, or allows existing users to consume in new and better ways. However, providers of these new services often bypass existing regulations and taxes paid by firms offering similar services in the ‘old economy’. Critics of the new services argue that avoiding regulation is the primary reason for their success.Uber is currently at the vanguard of this battle. The ‘ride sharing’ service – which is essentially a pre-booked taxi service – has entered many markets even where its drivers and vehicles are not licensed under prevailing transport laws. This enables Uber’s drivers to avoid certain licensing costs (and potentially other costs such as taxes) faced by existing firms.

Governments investigating the need for regulatory change are faced with two options:

In a previous bulletin, Uber regulated, we analysed the impact of technology on regulation, and suggested that government’s role should be limited to ensuring that vehicles and drivers operate safely.But, in markets where incumbents have a lot to lose, our prescription is easier said than done. Existing regulations are politically or financially costly to unwind. In the case of Uber, this is often due to the restrictive licensing of taxis, so new entry can create large losses for existing licence holders.In this bulletin, we argue that good policy decisions require an understanding of what we are giving up by insisting on levelling the playing field. Even if governments do so through a sense of fairness to incumbents, can we estimate what benefits the community might miss out on?

Increasing The Size Of The Pie

A useful insight from economic analysis is that there is a difference between entry that substitutes for existing services and entry that creates demand that was never there before. This difference is reflected in how we measure the economic value that is created.

Applied to taxis and ride sharing, we measure the effect of substitution by comparing the value to consumers and taxi operators of existing trips with trips taken with new entrants like Uber. Gains from substitution therefore hinge on an increased willingness to pay for existing services, or lower costs.

Increased willingness to pay for Uber’s service, where it substitutes for an existing taxi service, is certainly possible. Consumers clearly value Uber’s technology and improved controls over driver quality. Nonetheless, given the similarity of the underlying service to a taxi service, these gains are likely to be relatively small.

On the costs side, Uber may have lower costs as it avoids the payment of licence fees, which can account for between 10 and 20 per cent of total taxi revenues. However, other sources of cost advantage are less clear. Uber takes 20 per cent of each fare, while drivers keep the remaining 80 per cent. Most other costs, such as the driver’s labour, vehicle and fuel costs, will be similar for taxis and Uber. For example, the Australian Tax Office is now insisting that Uber’s drivers are subject to the same tax requirements as taxi drivers. So, it is not certain that Uber will have significant sustainable cost advantages.

Now consider the change in economic value if demand across taxis and Uber vehicles expands. The change in value is no longer the simple value of an Uber trip over a taxi trip, but instead the gap between consumer willingness to pay for more rides and the additional cost of supplying that service. It is not hard to imagine that at certain times, this value could be very large. Indeed, Uber’s ‘surge pricing’ is a means of capturing some of that very high willingness to pay at certain times.

It is good public policy to implement reforms whose benefits exceed their costs – that is, those reforms that create economic value – even if those reforms create losers.[1] A central focus of the case for reform should therefore be the relative size of these demand expansion and substitution effects.

Why Availability Is The Key To A Bigger Pie

To estimate demand expansion, we first need to identify where it comes from. Lower prices are one source. Given that Uber’s costs are somewhat lower, this is likely to be a modest source of new demand. In our view, the more promising and sustainable source of new demand is through better service quality.

We refer here to service ‘quality’ in a broad sense: it includes dimensions like driver and vehicle quality; ease of use; and service availability. The innovative technologies used by new services like Uber have significant potential to improve driver and vehicle quality and ease of use. And increased availability alone seems a significant potential source of gain, even in the absence of other quality improvements.

If there is an under-supply of existing vehicles, consumers will be more responsive to greater availability. This has both a short-term and a longer-term element. In the short-term, the gains from availability will be higher if demand is peaked and consumers have a relatively high willingness-to-pay in these periods. If peak supply has been heavily restricted by regulation, the benefits to consumers from additional supply via a new service could be very large. The longer-term benefit comes from the ability of taxis and other vehicles to act as viable alternatives to private cars. Many modern cities are dominated by private cars, so that even small changes in availability and reliability of ride services could increase the feasibility of longer-term switching away from private cars (see Box 1).

If peak supply has been heavily restricted by regulation, the benefits to consumers from additional supply via a new service could be very large.

The second condition is that regulations impose high fixed costs of entry. This might be due to licensing restrictions imposed on vehicles or drivers. These high fixed costs limit the overall number of vehicles and drivers that can profitably drive, and means it is harder to increase supply at certain high demand times. If, in contrast, entry costs were low, the costs of entry may be recovered from driving only a small number of peak hours. This is when the demand expansion effects are greatest. Moreover, this means that vehicles will not be on the road in lower demand periods, when availability of vehicles is valued less by consumers, and trip substitution is likely to dominate.

The two market expansion conditions suggest that the benefits from reform will be different in every market. Taxi markets in Australia, the United States and in some parts of Europe have historically been subject to restrictive licensing policies, which both raise the costs of entry and reduce supply at peak times. This suggests that, a priori, benefits from better availability could be very large. Other markets are less restrictive. In these circumstances, quantification of different effects is highly desirable. 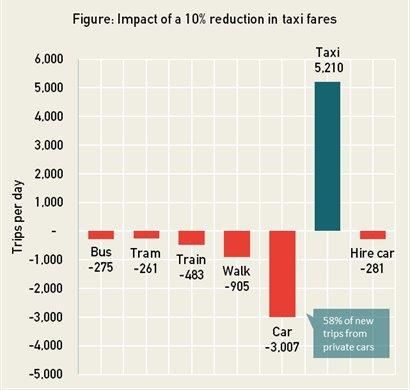 Research conducted for the Victorian Taxi Industry Inquiry in 2012 found that the primary source of substitution for taxis in Melbourne was private cars. This reflected the extremely high mode share of private car journeys. This is illustrated in the Figure. For a taxi price fall of 10%, the research predicts that most demand captured by taxis will be a result of fewer car journeys – even though hire cars were perceived by consumers to be a closer substitute. As private cars undertake over 80% of journeys, even a small change in mode share leads to large increases in taxi journeys.

Taking Up The Measurement Challenge

Forecasting the impact of regulatory changes on demand in a particular market is difficult, particularly as (in our experience) jurisdictions only rarely have access to detailed demand data that is held by taxi companies and new entrants. Nonetheless, a number of data sources can be used to estimate market expansion and substitution effects in particular markets.

A crude measure of impact might come from changes in taxi licence values. Tradeable taxi licences trade at prices that reflect the value that can be earned in operating taxi services. A reduction in value may indicate a substitution effect. That being said, changes in the value of perpetual licences occur for a range of reasons unrelated to taxi demand, so this is not likely to prove conclusive.[2]

A better estimate might come from direct inferences based on markets where entry by Uber (and its competitors) has occurred. For example, a recent analysis of trip data from New York, which has restrictive entry regulation, allows some inferences to be drawn. Across the greater New York area, the data suggest that for every 100 trips taken in an Uber vehicle, 65 were substituted from taxis. The remaining 35 were either entirely new trips or had substituted from other forms of transport.[3] Further analysis also revealed substantial variations across time and location. In outer boroughs that have traditionally been poorly-serviced by the famous yellow taxis, this figure was quite different. Of 100 Uber trips in these areas, 80 represented new trips while only around 20 were substitutes for taxi trips.

Using some assumptions, data like that collected in New York can be used to estimate directly the likely gains in consumer value from new entry. This analysis could be further improved by using trip data in conjunction with other data to directly estimate the price sensitivity (elasticity) of taxi services and potential substitute services. Greater increases in consumer value will be associated with less elastic demand for new services, as it indicates higher willingness to pay.

A third source of data is consumer survey data. These data can be particularly helpful as they are market specific, and does not rely on existing data sources. Surveying can range from simple questioning of alternatives to questionnaires designed to gather data for the application of statistical analysis. Such techniques can be used on survey data to estimate either demand systems, which provides evidence on the sensitivity of consumers to lower prices and more availability, or to estimate willingness to pay for new services directly.[4]

Levelling Up Rather Than Levelling Out

Modernising regulation to fit with recent technological innovations is a challenging task. It is tempting, but not entirely helpful, to postulate a world in which regulation does not exist. A more modest objective would be to maximise the value created by new services, and resist ‘levelling the playing field’ if that will undermine these benefits.

If policy is to be evidence-based, then the question of substitution or market expansion is where our attention should be squarely focused.

We suggest that the big gains to the community will occur if new services can fill gaps in existing services, and create new sources of demand. Quantifying these gains is undoubtedly difficult, but if policy is to be evidence-based, then the question of substitution or market expansion is where our attention should be squarely focused.

[1] A separate policy question arises as to whether the ‘winners’ from reform should compensate the losers.

[2] An example is that licence values are affected by the rate at which future profits are discounted. This rate depends on alternative rates of interest in the economy.

[3] The Economist, Taxis vs Uber: Substitutes or Complements, August 10 2015, available at: http://www.economist.com/blogs/graphicdetail/2015/08/taxis-v-uber