As NBN Co (nbn) continues to refine pricing of the various products it offers, we examine the early impact of a price change that took place 14 December 2017.

The change had two key components.

The second was to provider retailer service providers (RSPs) with a free 50% increase in shared bandwidth capacity (CVC) as part of a transition to new pricing models.

One of the criticisms of Australia’s fixed broadband network was the low take up of high speed connections, leading to headlines comparing Australia to Kazakhstan.[1] With 50% of nbn customers previously on 25/5 plans[2], shifting the customers to 50/20 plans by equating the connection fees could improve things. As expected, RSPs migrated plans, with TPG replacing the 25/5 plan with the 50/20 plan where available. Telstra, meanwhile, made the 50/20 plan a free upgrade to eligible customers or removed the 25/5 option.[3] As can be seen in Table 1, there has been a very modest uptake of the 50Mbps plan, with no impact on the average maximum speed of nbn connections. This is perhaps not surprising, given the limited time since the price change.

Key to the experience of an ultrafast broadband connection is actually being able to download at the speeds the connection is capable. However, there may be congestion if RSPs have not purchased sufficient CVC capacity from NBN Co; RSPs have claimed that the CVC price is too high to ensure good performance. This may noticeably slow down connections during peak hours, known as the ‘Netflix effect’.

Successive price discounting models failed to generate much of a reaction, with average CVC capacity purchased per user barely budging over last two years. However, the December 2017 change was substantial in magnitude, offering 50% extra for free.[4]

The initial results of this can be readily observed. While the increase in 2017Q3, from 1.09 to 1.11 Mbps was described as “encouraging”,[5] the increase shown below should leave Rod Sims ecstatic. The 38% increase in capacity per connection should meaningfully impact customer experience. 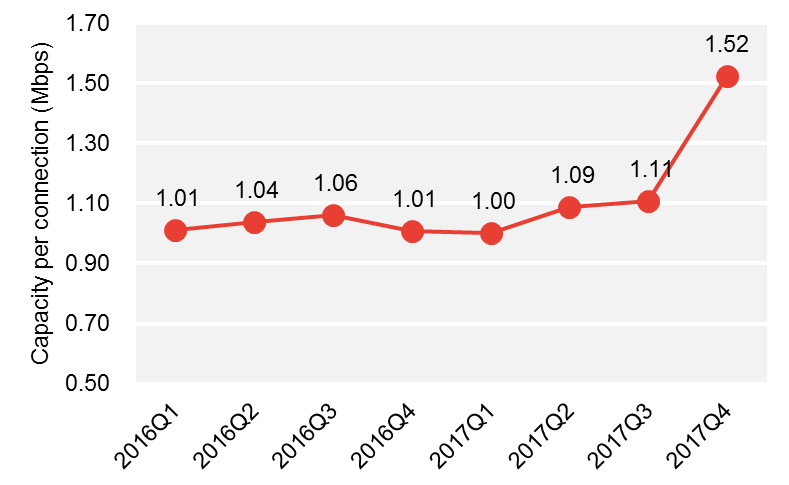 Only time will tell whether this is the start of a trend towards increasing purchases of bandwidth, or a one off blip driven by a “freebie” for RSPs. Needless to say, it is a rare bit of good news for nbn.

We have been concerned that CVC prices have been neutralising the NBN’s key competitive advantage: the ability to send large amounts of data through its network at very low (near zero) cost. Only substantial and long-lasting changes to CVC pricing will allow the NBN to withstand inevitable competitive pressure from mobile broadband. With NBN Co recognizing the threat[6], and introducing new pricing models, we have seen perhaps the first ever improvement in NBN congestion during peak hours.

[4]             Not quite the same as a 33% discount: under the pricing model the price faced by an RSP depends on CVC quantity bought during the previous Billing period.

[6]             “Wireless broadband will be a legitimate alternative to fixed broadband in the 2020s for some applications – more than we may have assumed say five years ago,” – NBN chairman Dr Ziggy Switkowski, CommsDay Congress, October 2017.