The Economics Of Christmas

It’s easier to think of economists as the prophets of trading doom than as Santa’s little helpers – too busy telling everybody what’s happening to productivity, energy demand and like-for-like sales to provide any insights into the annual exchange of goodwill and good-or-ill gifts to family and friends. So Frontier Economics has been scouring the academic literature of behavioural economics for tips to make that last struggle with your present list a little easier…

With so much, for retailers, hanging on their Christmas trade, it’s not surprising that economists have been attempting to analyse present-giving for years. Most of the research, however, has a narrow, distinctly Scrooge-like tone to it (maybe too much of it was conducted by analysts soured by their annual quota of socks). So what follows is an attempt to elicit slightly more seasonal cheer – and even a little buyers’ guidance – from the available stock of behavioural economics and consumer psychology.

Present buying isn’t easy. Ideally, we would give something whose value to the recipient is greater than its cost, having found something original and beautiful that surprises and delights. But the risk is that the value to the recipient is actually lower than the cost: it’s just not something he or she wanted. Joel Waldfogel, an academic who has researched this “deadweight loss”, estimates that at least 10% and maybe over 30% of the total value of present exchanges is wasted. Of course being given something is nice, but (except for the weird and wonderful offerings from our children) we don’t really think “it’s the thought that counts”.

So as you compile your present list, how should you deal with deadweight risk? Take it as part of the friction costs of Christmas, like traffic queues and indigestion? Or be a bit more disciplined? You could, for example, decide that:

So far, so (relatively) simple. But behavioural economics offers some more sophisticated insights into giving strategies. Here are a few examples:

TWELVE INTO ONE DOESN’T GO

So how much of this have you already got right this year? Research tells us that women tend to plan and buy their presents earlier than men and that parents tend to buy earlier than those without children. Married, middle-aged, men are the worst planners. The chart below illustrates something everyone except such men seems to know: buying early can reduce both congestion costs and risks. 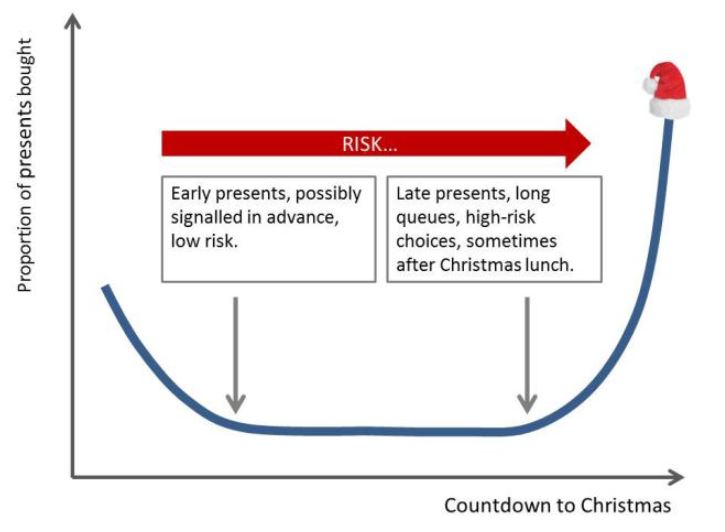 So why do the laggards wait? Late shoppers often claim they simply misjudged how much time it would take to compile their present lists, but it’s hard to square that with the repeat nature of Christmas. More likely explanations provided by behavioural economics are that late shoppers fail to remember how poor some of their choices were last year (the so-called rosy retrospection effect) or simply loathe shopping and suffer from the “ostrich effect”. Not, of course, to be confused with the turkey effect that comes only days – or even hours – later…

Game theory, one of the great advances in economics over the past 30 years, also offers some tips for a successful Christmas. Watch out for:

Like – we hope – this bulletin. A Happy Christmas, giving and receiving, and a peaceful and prosperous New Year to our friends, clients and collaborators from all of us at Frontier Economics.