When the facts change, I change my mind. What do you do?

The 6th of June 1944 marked the beginning of the Battle of Normandy, a decisive turning-point in World War II that led to the liberation of Western Europe. Under General Dwight D. Eisenhower’s bold plan, 160,000 Allied troops would cross the English Channel under cover of darkness, land on several beaches in Northern France and push deep into German-held territory. The Normandy landings remain the largest seaborne invasion ever recorded, and one of the most successful Allied campaigns during World War II. However, the whole endeavour was nearly scuppered by the most mundane of things: bad weather.

The landings were originally planned for the 5th of June. However, it became clear by the 4th that heavy winds and rough seas would make the audacious landings impossible. Meteorologists advising Eisenhower forecast that conditions would improve sufficiently by the 6th for the invasion to proceed. The Allied Commander wisely heeded the advice to delay, changed plans that had taken months of meticulous preparation—and the rest, as they say, is history.

Flexibility when making decisions is valuable not just in military strategy. All of us adjust our plans in response to changing circumstances and new information—whether that entails taking a different route home from the usual one to avoid traffic, or more life-changing choices, like whether to buy a house when the outlook for the property market is highly uncertain.

Commercial and public investment decisions are no exception. Businesses and governments making major investment choices often do so in the face of significant uncertainty about the future. Rarely are the investment choices completely fixed. Investment plans can often be adapted—for example, by waiting to see what happens rather than taking a decision now, or by pursuing a different investment strategy—when confronted with new information that affects the value of the investment.

Bizarrely, even though many investors do in practice change their behaviour in response to new information, the techniques typically used to value investments ignore this flexibility. For example, standard Net Present Value (NPV) analysis used in commercial investment appraisals and cost-benefit analysis (CBA) used to assess the net public benefits of government investments generally assume fixed investment plans that cannot be revised, regardless of how circumstances change.

If the flexibility to change investment strategies is valuable—and it can be materially so in many situations—then standard NPV analysis and CBA will understate the value of investments. Investors who realise this often resort to ad hoc, qualitative judgment in order to take account of the value of flexibility—usually an excellent way to make bad decisions.

Worse still, what happens if two competing investment options are being considered side-by-side, but one presents the investor with more (or different kinds of) flexibility than the other? How are those two options to be compared on a like-for-like basis? Unless the flexibility is valued quantitatively, there is every chance that the two investment opportunities will not be compared on a level playing field, and the wrong (i.e., value-destroying) investment may inadvertently be selected.

The value of flexibility: a simple example

Figure 1 presents a simple example, which shows that when faced with uncertainty, flexibility to respond to new information can increase the value of an investment. 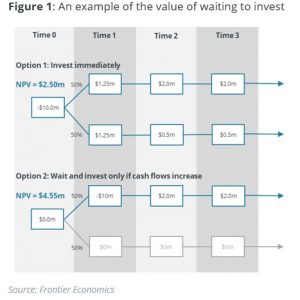 The difference in the NPVs under Options 1 and 2, $2.05 million, represents the economic value of flexibility (the ‘option value’) to change the investment strategy in response to new information.

Real options analysis (ROA) is a technique that allows the systematic quantification of the economic value of flexible decision-making. Unlike standard NPV analysis or CBA, ROA recognises that investors can alter the way a project is rolled out as circumstances change and calculates the value of the project under different possible investment strategies rather than a single, fixed strategy.

Examples of flexibility in decision-making that ROA can account for include the options to:

When is flexibility valuable?

A key insight from the ROA literature is that the value of flexibility can be particularly large if:

This is because infrastructure investments tend to be long-lived (so economic conditions can change materially over the life of such assets), and typically involve billions in sunk costs.

The NBN: an application of ROA

With a forecast peak funding requirement of $51 billion, the National Broadband Network (NBN) represents the largest infrastructure project ever undertaken in Australia.

Given the size of the project, it is astonishing that the Rudd Labor government, which pledged to deliver the NBN, refused to conduct a CBA to assess its merits. Indeed, the Federal Communications Minister at the time argued that the benefits of the NBN to Australia were self-evident, and that conducting a CBA would be a “waste of time, waste of effort, waste of money.”

The most contentious aspect of Labor’s NBN plan was a commitment to deliver fibre to the premises to 93% of the population with broadband speeds of up to 100 megabits per second. The ambitious choice to build fibre to the premises was intended to deliver a network with sufficient capacity to last for generations, but also involved the highest construction costs.

The decision to roll out fibre to the premises was particularly controversial because it was unclear in 2009, when the plan was first announced, that there would be sufficient future demand to justify the broadband speeds and build costs associated with a fibre to the premises network. Whether fibre to the premises would be truly worthwhile depended on what sort of applications would emerge, and how consumers would choose to use broadband services, in future. However, the government of the day pressed on with its plans for a “Rolls-Royce” NBN as though such speeds would definitely be required, regardless of the uncertainty over future demand. No account was taken of the option to delay or to build gradually.

When Labor lost the 2013 general election, the incoming Coalition government commissioned a CBA of the project. That study assessed the net benefits to taxpayers of three options for rolling out the NBN. It concluded that, against the base case scenario of halting the project immediately:

The study suggested that Labor had picked the worst of all rollout options.

A commendable aspect of the CBA—which made it stand out compared to most other government CBAs—was that it made some effort to account for optionality. The CBA recognised that a key uncertainty was the extent of future growth in demand for high-speed broadband. The study concluded that whilst a multi-technology mix rollout would offer slower speeds than a fibre to the premises rollout, it would allow the NBN to be upgraded at a later date, if demand turned out to be higher than anticipated. 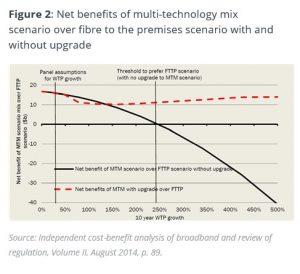 Based on these results, the CBA concluded that:

Overall the [multi-technology mix ] MTM scenario has significantly greater option value than the [fibre to the premises] FTTP scenario. The MTM scenario leaves more options for the future open because it avoids high up‐front costs while still allowing the capture of benefits if, and when, they emerge. It is, in that sense, far more ‘future proof’ in economic terms: should future demand grow more slowly than expected, it avoids the high sunk costs of having deployed FTTP. On the other hand, should future demand grow more rapidly than expected, the rapid deployment of the MTM scenario allows more of that growth to be secured early on, with scope to then upgrade to ensure the network can support very high speeds once demand reaches those levels.

Making us better off

John Maynard Keynes is often credited with saying “When the facts change, I change my mind. What do you do, sir?” In fact, the actual source of this quote was not Keynes, but Paul Samuelson, another famous economist.

Regardless of who actually said the words, the sentiment behind them makes intuitive sense to most of us. We do not go through life following a perfect linear path, regardless of what life throws at us. We adapt our plans as circumstances change because doing so makes us better off.

Commercial and government investment decisions are much the same. Yet, standard NPV analysis and CBAs used to appraise such investments typically ignore the value that can be gained from changing the investment strategy in response to new information. This can result in the value of investments—particularly those that are long-lived, exposed to significant future uncertainty and involving large sunk costs—being mis-estimated. This, in turn, can lead to suboptimal investments being selected, at significant cost to shareholders or taxpayers.