A Land Tax By Any Other Name

Australia needs at least $300 billion, and up to $700 billion, spent on infrastructure over the short to medium term if it is to maintain and improve its productivity and liveability [1]. However, short-termism and budgetary pressures mean governments are often unwilling to directly fund infrastructure even when it can deliver enormous value over the longer term. Opposition to user pays pricing, raising taxes or increasing debt mean more sophisticated ways of funding infrastructure need to be considered. Value capture mechanisms (VCM) are currently being explored by Infrastructure Victoria and represent a key component of the latest proposal for high speed rail linking Sydney and Melbourne. This bulletin explores the benefits, costs and challenges associated with implementing value capture mechanisms.

What is value capture

According to the Smart Infrastructure Facility, value capture “describes the process of government capturing’ (via taxation) a proportion of any increase in the unimproved value of privately-owned land caused by the construction of new (or improved) publicly-funded infrastructure.” [2]

Value capture mechanisms can include:

“Land uplift levies” or “betterment levies”: A levy is imposed on private land holders, individuals or businesses related to an estimated increase in the unimproved land value. Betterment levies were used to fund the Sydney Harbour Bridge, public infrastructure in Columbia, and more recently the London’s CrossRail project.

The sale of development rights: Private contractors are granted rights or sold public land typically as part of a tender involving the development of the desired infrastructure. The Melbourne Central station redevelopment was funded this way, as well as public infrastructure in Sao Paulo and New York City.
Change of use charge: A charge associated with the rezoning of land to reflect its improved value because of its potential new use – for example, a change from commercial only to residential use. A change of use charging regime is currently in place in the ACT.

The latest high speed rail proposal linking Sydney and Melbourne proposes to finance the $200 billion venture through something akin to value capture. The private venture intends to purchase land along the development site and then develop eight new cities along the route. The uplift in the value of the land will then be used to generate funding for the project. [3]

Who should pay for infrastructure?

As a starting point, we are all better off when the beneficiary of a service bears the costs of its provision. However, since the beneficiaries of infrastructure, and the extent to which they benefit, can vary widely, there is no single best approach to determining who should pay for public infrastructure projects. Examples of beneficiaries, and what this means for who should pay include:

In practice, new infrastructure benefits many different stakeholders, and can reasonably and efficiently be funded from one or a combination of these groups.

Value capture has a lot going for it

Firstly, value capture mechanisms are typically applied to land, and land taxes can be more efficient than general taxation. In fact the noted free market economist Milton Friedman described them as the “least bad tax”! When set correctly, they do not distort people’s choices, unlike for example, a tax on income which may cause you to work less. Indeed, rather than resulting in a deadweight loss to society like other taxes, they actually reduce the overall burden of taxation on the domestic economy (see Figure 1).  This is because a portion of broad-based land taxes will be paid by foreigners who own land in Australia, resulting in an income transfer from overseas to domestic residents.

Second, they can reduce the incentive for the potential beneficiaries of infrastructure investments to lobby politically for them. If the beneficiaries know they will pay for some or all of the benefits they will receive, they are less likely to invest effort in diverting resources to “their” project. This is good because such rent-seeking behaviour in itself creates a burden on society, and it reduces the potential for infrastructure projects with the loudest proponents being prioritised over projects that would deliver greater benefits. 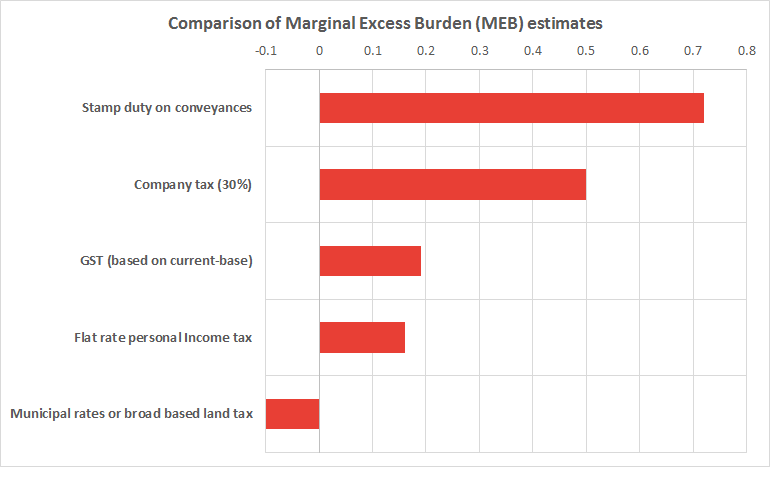 So what’s the catch?

While there is no doubt about the potential for value capture mechanisms to support infrastructure development there are some challenges in assessing and capturing the new value created:

The potential for value capture mechanisms to break the infrastructure funding bottleneck needs to be considered on a case-by-case basis, and only used where benefit attribution and administrative complexity can be cost effectively overcome.

This can be seen in relation to betterment levies, where careful consideration needs to be given to how the levy will be determined, how monies will be collected, what the appeals process will look like, how revenue will be invested, and how disadvantaged stakeholders will be assisted. This process will identify legislative and administrative barriers and highlight where the administrative costs of collection and compliance cost are high.

Too Much of a Good Thing?

Governments may be tempted to prioritise projects that can be partially or fully funded by value capture mechanisms, as they reduce the call on already stretched budgets.

Focussing on the potential for using value capture to fund projects, instead of the net benefits those projects deliver, risks certain types of projects may being systemically prioritised. For example, rail projects would seem most likely to lend themselves to value capture. This is because the beneficiaries can be more easily identified in an immediate region around a station. Furthermore, development contributions can be collected from rezoning the land as part of any station re-development that occurs.

However, to generate the greatest welfare for society, infrastructure projects with the highest net benefits, regardless of funding sources, should instead be prioritised. Net benefit can be determined using a cost benefit analysis that can (and should) take into account a wide range of impacts. Projects funded using value capture will have the additional benefit of reducing the tax burden compared with projects funded directly by the public purse (see Figure 1). However, this benefit can be monetised and captured within the traditional cost benefit analysis framework. It is projects with the highest benefit relative to cost that should be prioritised.

Independent assessment and prioritisation of infrastructure projects based on robust and transparent cost benefit analyses is therefore essential to guide government priorities.

Value capture mechanisms are commonly viewed as being fairer and more equitable than other funding mechanisms ─ by virtue of ensuring those who benefit pay ─ but they can create equity concerns of their own.

For example, where a project is part of a larger state wide program of works – such as rail grade separation programs – it would seem inequitable to use a value capture mechanism where similar works, in other regions, have previously been funded through general taxation. Of more direct concerns are the cash flow issues value capture mechanisms can cause for those who are asset rich but cash poor, such as retirees. Some individuals may find themselves unable to pay a tax bill for a new infrastructure investment that has substantially increased their property value. This might require the owner to sell the asset or rent it out and move elsewhere. While this can be addressed through specific exemptions, or deferment (for those that can demonstrate they do not have the current means to pay), this adds to administrative complexity and cost.

What’s the hold up?

Value capture mechanisms tick a lot of important boxes: they can be efficient, resolve funding issues and they have been successfully used to fund important and large infrastructure projects around the world.

So why are value capture mechanisms used so infrequently in Australia?

The answer to this could lie in government and public concern about the application of any new tax. As with any reform, it is critical that politicians and the public understand what these mechanisms are intended to deliver, why they are necessary, and how they will be delivered, otherwise their existence will be short lived. Given their apparent appeal on paper, it’s puzzling that betterment levies are not more widely used as a funding mechanism.

There is ample evidence of the need for, and potential value of, new infrastructure in Australia and value capture mechanisms can enable this. But in going forward, governments need to ensure the prospect of additional revenue raising does not dominate project selection, that only projects with the highest net benefits are pursued and demonstrate to the public how value capture mechanisms can be implemented.

[2] Smart Infrastructure Facility Submission to The House of Representatives Standing Committee on Infrastructure, Transport and Cities began conducting an inquiry