Achieving a cool and green Western Parkland City (WPC) in the South Creek corridor that is able to catalyse the significant investment being made in the Western Sydney Airport and compete successfully with the more established Eastern Harbour City (centred around Sydney Harbour), and Central River City (centred around Parramatta River) will require ‘city shaping’ investment in blue-green infrastructure in the Western Parkland City. This involves conserving, investing in and actively maintaining ‘green’ infrastructure (such as urban canopy, open space) as well as blue infrastructure (water-related infrastructure such as waterways and stormwater management) to support and promote amenity, recreation, urban cooling and environmental outcomes.

Against this backdrop, Frontier Economics is assisting Infrastructure NSW with the South Creek Sector Review to develop regulatory certainty for integrated water and land-use planning.

The path chosen for the development of the WPC will affect national productivity, the quality of life for people living and working in Western Sydney and the value that can be created from existing and new infrastructure. Developing and sustaining a competitive, liveable and resilient city presents a complex set of land use and water management challenges, and there are significant economic, environmental and liveability-related challenges to achieving the WPC vision. 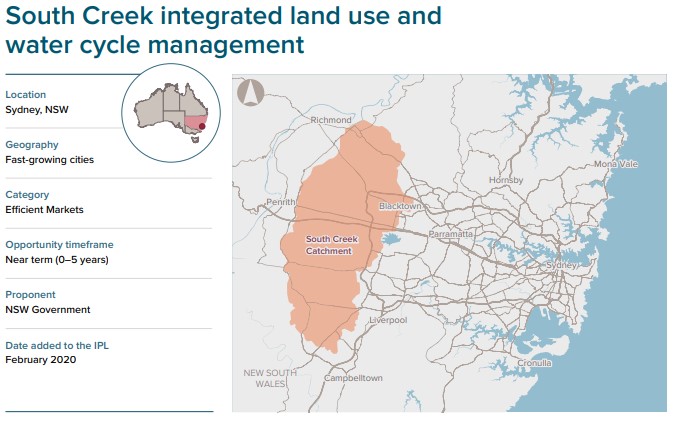 Frontier Economics assisted Infrastructure NSW in developing the submission to Infrastructure Australia’s Infrastructure Priority List and is advising a range of clients on economic issues and challenges in urban growth and development.